“Load on Scroll” is quite useful in two scenarios:

✓ To improve the performance of complex forms: Forms which have a large number of embedded reports, possibly containing hundreds or even thousands of records, may experience slower loading times when attempting to load all reports simultaneously. By enabling this feature, performance can be improved because embedded reports do not load until they are viewed. With only one or two embedded reports loading at a time, lag is reduced at the time the form is loaded.

✓ Load reports after an automation has fired: At times it can be very useful to add a child record from a parent record and immediately view the newly created child record(s) within an embedded report. For example: Timesheets automatically added to a Schedule Request via automation, where timesheets are viewed in an embedded report on the parent schedule request. In the past, your timesheets would be automatically generated, but would not show up in an embedded report until the record was refreshed. With “Load on Scroll” the user only needs to scroll to the location of the report, causing it to load for the first time and the newly created timesheets will appear.

EDITORS NOTE: “Load on Scroll” is selected in your app as the default. I strongly recommend using this feature in almost every situation. Disabling the feature can lead to minor improvements in simple forms. It can be switched on/off at both the app level, as well as the form level.

To toggle this feature on/off at the app level:

To toggle this feature on/off at the form level: 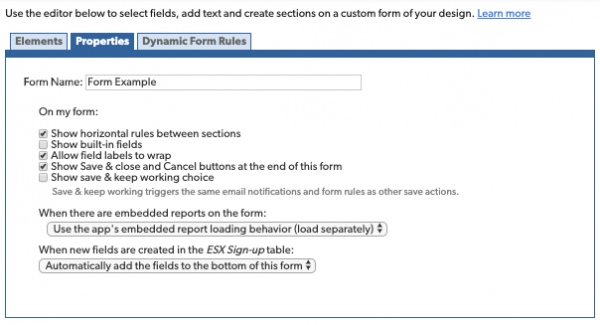 Each option pretty much does what it says. The first option is the “Scroll on Load” option described previously.

For more tips and tricks for managing forms click here